Due: May 9 (per syllabus posted on the site since Jan.)
Value: 20 percent of grade

Multimedia feature package due at the start of class. This must include an originally reported text story of 500 to 700 words (or a video package of equivalent length and depth), at least one photo (either shot by you or acquired by you), a well-written photo caption, a headline and at least two related links.

In addition, one complementary multimedia element is required: It could be an audio clip you’ve collected, edited and posted; a table of information you’ve compiled and linked to; a Google map you’ve created and linked to; or a photo gallery you’ve built. (These are just examples. If you have any questions about what qualifies as a complementary element, please see me. Grad students have their own instructions.)

This will be created in Dreamweaver and uploaded to the campus server.

Here are two stories created by Chris Harvey’s classes in the past:

We’ll have a full class period on Monday to look at the use of data visualization in online journalism.
A good place to begin is by reading Anne Eisenberg’s article from the New York Times about the site called Many-Eyes, a free site organized by I.B.M. for displaying and sharing data.

As we saw in the last seconds of class on Monday, I worked on a small data visualization, taking some stats I found in a recent article from the Cleveland Plain Dealer.

The newspaper had a story that mentioned the decrease of fans from the Indians’ home-opener to Game 2. Unfortunately, it didn’t follow any kind of online journalism work ethic when it posted the following – without even a text box:

x-In 2007, the Indians opened their home schedule in Milwaukee because of poor weather conditions in Cleveland.

However, I thought that would make for a good data visualization, so I logged into my account on Many-Eyes and uploaded the stats. This is what I got:

So here’s the plan. Please, in the next week, find some data that we can manipulate in class. Bring that data with you on Monday, and also sign up for an account on Many-Eyes.com.

It’s not only data that works in these visualizations, either. It’s text. Perhaps you have a transcript of an Obama speech you’d like to try this out with.

For this next assignment, we’ll take the CSS resume template you downloaded in class and refine it with your own career information and add your own style.
You’re either using the template with a linked stylesheet or an embedded stylesheet. 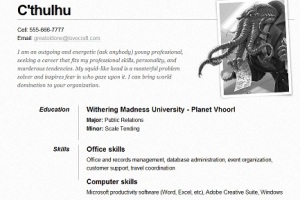 A CSS resume template from css-tricks.com

By the time we arrive in class on Monday, please be prepared to upload the customized version of your resume to your personal hosting.

For the resumes with the linked stylesheet, you’ll need to modify the CSS by opening the .css file in Dreamweaver and tinkering with it there. Be sure to have this page available to upload in class, too.

We’ll then create custom menus in WordPress which will allow you to include an off-site link within a menu.

Also, you’ll need to create a new page or post in WordPress that shows off some of your work samples. You will link from your resume to this page. You should also be linking to the pages of the places for which you’ve done work, but you don’t need to do more than provide a link at the bottom of your resume to your “Work Samples” page.

The take-home segment of the midterm is due at 7 p.m. on March 28. It must be posted to your personal blog. Send me the url via email and tweet it to the class twitter account via direct message. Follow the good Web-writing guidelines we have discussed in class these last eight weeks, which means: SEO-friendly headline, quality in-line links in your copy, screenshots when necessary, bulleted lists, anchor tags if necessary.

"Frank Sinatra Has a Cold" is known as one of the best stories ever done by Esquire. How would you have published it online?

Sourcing and captions for photos. Use real-world examples as evidence for your assertions.

I do not want you spending more than 90 minutes (aside from reading and intelligently considering the story on which you are working) on this assignment, since traditional midterms are done in-class. We will have one hour for the in-class portion of the midterm on March 28.

Write a coherent, conclusive post of at least 550 words (please post the word count at the bottom of your post) based on a feature story, enterprise story or profile from the years 2003 or earlier. END_OF_DOCUMENT_TOKEN_TO_BE_REPLACED 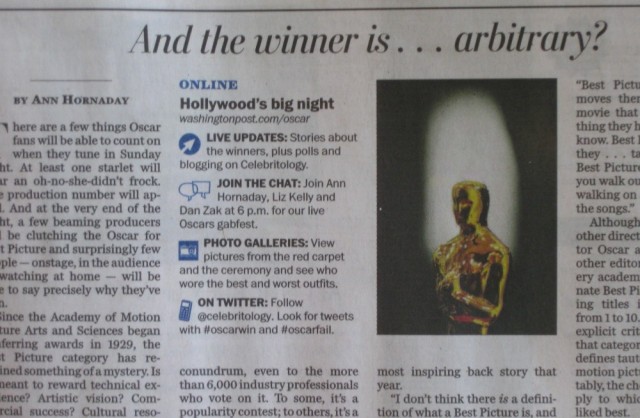 One item we have discussed in class so far this semester is how publications that have traditionally used print to get the news or stories out to the public have transitioned to the Web.

For this blog post, you will find the hard copy of a story and compare it with what shows up on the Web that’s related to that story. Is it straight “shovelware,” (a word-for-word version of the story from print) or is it something more creative. Are there complementary elements that go along with the story that are promoted in the publication’s hard copy? What are they and how are the executed online? How are the promoted on the page? When you find the story online, are keywords linked in the text? Where do they go?

In your post, be sure to give me a recap of your story plus a screenshot of the story page. If your publication used something like a “value added block” to show the related links, let me know.

Either take a photo of the print version of the story and include it in your blog post (as I have done above) or bring a copy of it into class and turn it in on Monday, March 7 at 7 p.m. Please post this assignment to your blog by noon on Monday, March 7 (and tweet it to kni2103) and comment on one of your classmate’s posts by the time class begins.

This is an analysis of a news website (at least five 250-300-word blog posts for the undergrads, and seven for the grad students), selected from the following list (you may consider a different site with my approval):

The next assignment has three elements. All three elements are not due until Feb. 28, but you must post the first element – your media diary – to your own blog and tweet it to the class blog by Noon Sunday, Feb. 27. This will give your classmates an entire day to read your blog post and write a thorough comment. (“Hey, nice post” is not sufficient.) You must comment on the two classmate’s blogs you signed up for.

Track your online media consumption for five days (you don’t have to include every little thing you read, but let’s say 3 or 4 items per day). How did you get to the stories you read or watched or listened to? Make a note of it. How did you consume most of your material, was it audio, video, text, YouTube, etc. Take screenshots when you have the time. Link to the stories you read in your post (you don’t have to link to everything you read, but at least one hyperlink per day). Since your are tracking your behavior for five days, please include 3 screenshots over that time. Please break up your post with a subhead for each day. It would be smart to include anchor tags for each one of those days so your reader can navigate your post by day.

A screenshot of RSS feed window.

END_OF_DOCUMENT_TOKEN_TO_BE_REPLACED

Here is some text that we want to link up.

From a Washingtonpost.com story on the Nationals.

Flash, Java, Widgets, oh my!
We see news organizations using these formats over and over to help tell stories. In some cases, a plain HTML table will do the trick, like in Terry Pluto’s column for the Cleveland Plain Dealer about the terrible season the Cavs are having.

Take a look at this example and then in the comments field of this post, write a short response that includes a link to another news story that effectively used a basic HTML or text table as a visual aid.

END_OF_DOCUMENT_TOKEN_TO_BE_REPLACED

Posted on February 9, 2011 by danfriedell

Wondering what your photos will look like in WordPress? This blogger created a handy guide to the typical alignments and sizes. Check it out!
http://ping.fm/zyuwx